Jedidiah Wiggle-bottom Happy-feet Puddle-jumper Jonassen was a good noticer. He noticed all kinds of things. Mostly, he noticed with his nose. Then his ears and then his eyes and then his paws.

He noticed everything on his walks each day. And he noticed when things changed inside his house. Sometimes Jedidiah Wiggle-bottom noticed things that were new and strange and that worried him a little. But he always tried to be brave, pay attention, and learn as much as he could. Then, things seemed less scary.

One day, when Jedidiah Wiggle-bottom first came to live in his Forever home, he was in the house alone, sleeping on the couch he wasn’t allowed on, when he heard quite a commotion at the back door. He jumped down and went to the door to listen. It was his family, alright, but something new was happening.

The door opened and there were his people, with a tree! They’d cut down a tree! He was a little upset at that, but then things started to get really weird. They were bringing the tree inside the house!

Now, Jedidiah Wiggle-bottom knew a lot about people. One of the things he knew, was that people were always trying to get outside things inside. His family had fire inside, sunlight inside – even a tiny rain room. (Sometimes Jedidiah Wiggle-bottom sat for hours looking through the glass doors of the tiny rain room, trying to figure out how the rain got from the sky into the silver nozzle that his people stood under to get rained on. He still hadn’t figured that one out.)

And now, here they were, bringing a tree inside the house. He watched as they put the tree in water and set it up in the front room. Maybe it’s because it’s so dark and cold outside right now and a tree might brighten things up, he thought.

And sure enough, that must have been it, because they decorated that tree with all kinds of shiny pretty things and oh, that tree made the whole house smell a little bit like the forest.

Once they had it all dressed up, they just sat and looked at it.

That’s a new one on me, thought Jedidiah Wiggle-bottom Happy-feet Puddle-jumper Jonassen. And he went to bed.

The next morning when he woke up, a miracle had happened! There were all kinds of pretty, smelly packages underneath that tree. The tree was magic. His people were excited to see the things the tree had made as well, but they seemed to know what they were. They called them “presents”.
​
And guess what? There was one for him! 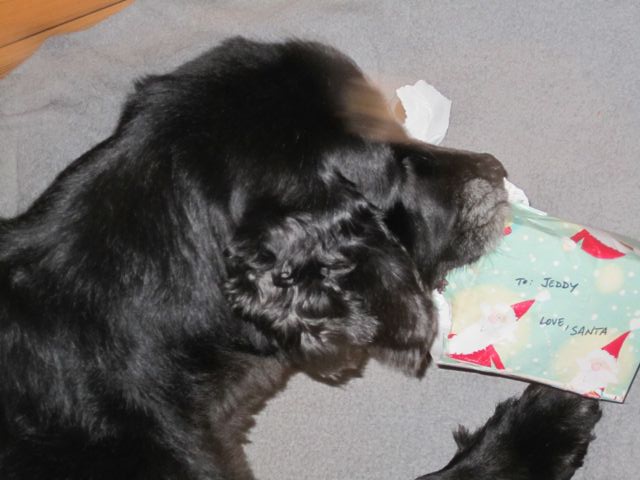 ​Jedidiah was so excited, his Wiggle-bottom almost wiggled right off his bottom. He opened the present carefully but he knew what it was even before he saw it. His nose told him it was yummy treats. He loved opening presents! He loved it so much he offered to open his people’s presents, too. Oh, it was a wonderful day of carefully opening all the delicious smelling presents and when that was done, Jed was allowed to rip up all the paper. Oh the smells! The sounds! The tearing in his teeth! Jed listened carefully and learned that this great day was called, “Christmas.”

The next time the days got very short and dark, and the cold weather settled in, Jed started to watch out for Christmas. Before long, a tree came in from outside. And presents appeared but didn’t get opened. They just sat there under the tree for several days and nights. Jed kept offering to open them, but his people said he had to “wait” which was a word Jed knew.
​
One day, his family went out and left him snoozing happily, dreaming of when they would get to open the presents. 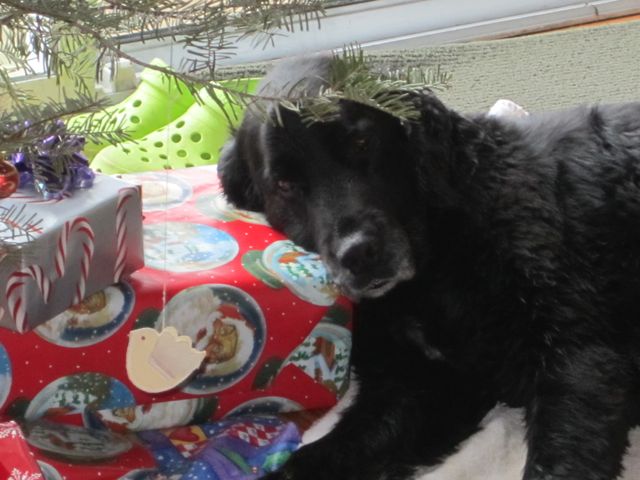 When he woke from his lovely dream, he thought it wouldn’t hurt to open one. There were so many. Maybe no-one would even notice. So he carefully tore the corner of the paper on a pretty little package. He pulled the paper carefully and slowly worked all the paper off of the present. It was a book! His people loved books – they would be so pleased he’d found it for them. He decided to open one more. He selected another one that smelled like a book, and sure enough, it was! Oh, his people would be so happy with him! 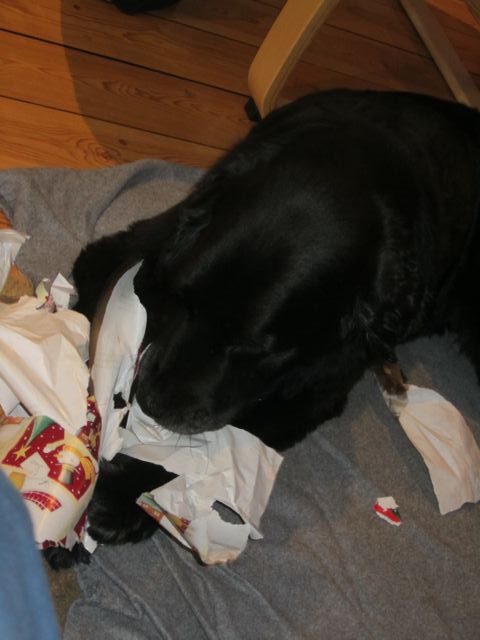 ​He decided to stop and leave the rest for his people because they really seemed to enjoy the opening, too. But then he noticed one that smelled like it was probably for him. Before you could say Jedidiah Wiggle-bottom Happy-feet Puddle-jumper Jonassen, he’d opened them all! He looked at all the paper and decided he better to get to work ripping. So he did. All of a sudden, the door opened and his family walked in. 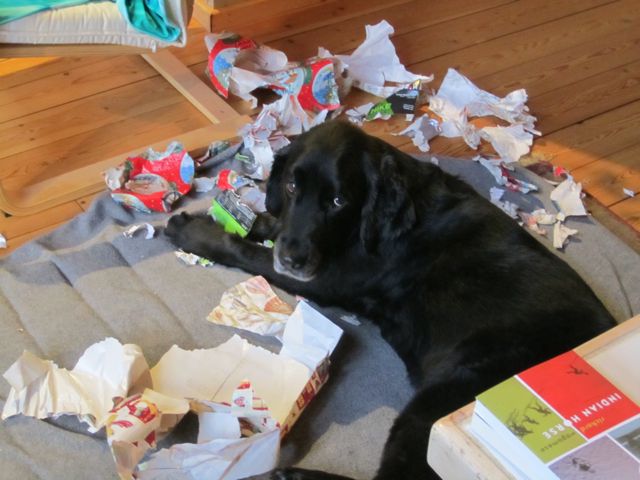 ​
But everything was okay.  His people re-wrapped all the presents and in a few days, they let him do it all over again.